Open to all breeds of cat from all over the world!

Judged by a Team of International Cat Judges

This virtual show is open to any breed of cat (including domestic pets) from all over the world.

Judging will commence 5th December and winners will be announced on this page and also on the CattyLicious Facebook Group. 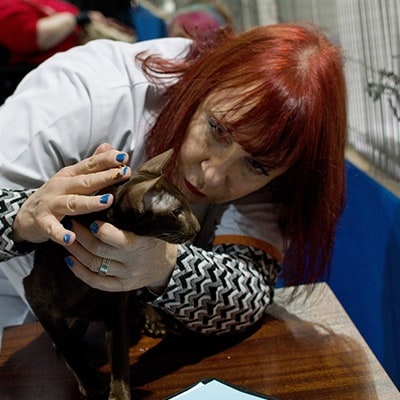 Thanks to Ross for inviting me to judge this virtual show and I am really looking forward to the challenge!! I have really enjoyed doing this before and I am really looking forward to looking at all your cats and kittens! I have been a judge with GCCF since 1992 and judge in all sections with the exception of 4. I have judged with TICA since 2011 and am an approved all breed judge as well as a ring and school instructor. I am also an all breed judge with WCF. I am still breeding Persians and Exotic Shorthairs under the Zendique prefix but have to say that I am a cat lover in the widest of senses and love all things feline!! 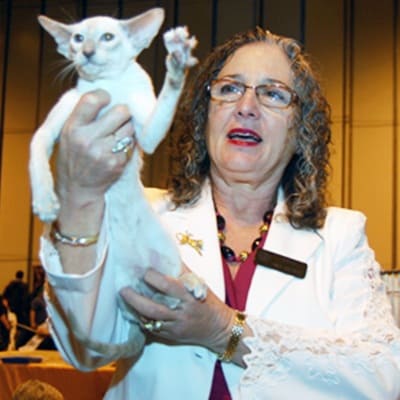 I began breeding Siamese and Oriental cats in 1983 under my Firousi prefix. For the last 12 years I have concentrated on Oriental Bicolours, in particular the longhair variety, including the only LH OBC to date to gain a title under GCCF.
I became a Siamese judge in 1999. Since then I have also qualified as a judge of Persians & Exotics, Maine Coons, British SH, Burmese, Suffolks, Orientals, and am currently working towards qualifying for Russians, Asians & Tonkinese. I am very excited to be able to judge at this show and look forward to seeing all your cats and kittens. 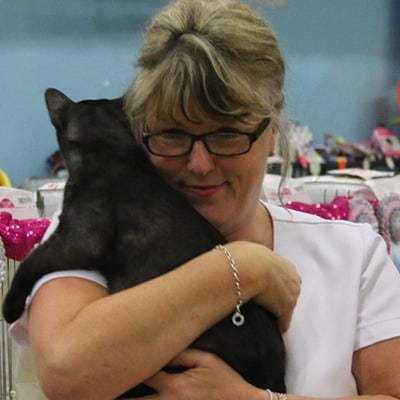 Thank you very much to Ross for inviting to judge at this online show. I have thoroughly enjoyed taking time out to judge at these types of shows for GCCF and Tica too!
I started my life in the GCCF in 1989, showing neuters at first and was so enthralled with the British and Burmese. I decided to breed British and show them mainly in the Bi-Colour group but also bred colourpointed for some years before DNA testing came in as one had “popped out” in a mating I did many years back. My prefix is Loraston.
I became a British Full Judge in 2005 after 3 years of training, now I judge in all 6 sections of the GCCF, section 6 I am a pupil judge. GCCF Lists I am “full” on include, British, Manx, Selkirk Rex, Chartreuse, Persian, Exotics, Maine Coon, Siberian, Burmese, Devon Rex, Sphynx, Suffolk, Toyger and Asian, I am also a FJP in another part of our judges scheme on Tonkinese, Cornish Rex, Australian Mist and La Perm. I am a pupil judge on Ragamuffins, Siamese, Balinese, OSH & Russians.
I am looking forward, very much, to judging your lovely cats! 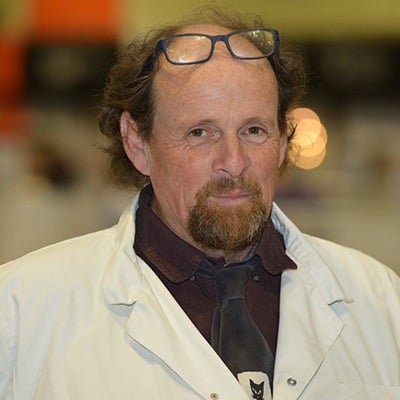 Thank you to Ross for asking me to be one of the judges of this virtual cat show, I look forward to seeing your pictures. I have had household pets since the age of six and my first Persian when I was sixteen, I started breeding Persians when I was eighteen and have been judging for eighteen years. And involved with the GCCF for thirty-five years. I judge the Longhair section, Semi-longhair section, British section and am working through the foreign section. My prefix is Jomarc and I breed Persian, Exotic, Burmese and Devon Rex. 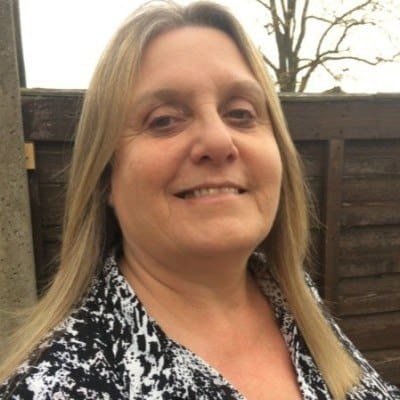 I started showing in 1974 in the HHP section and then went on to show/breed Persians in 1981. I am a full judge in many sections, hoping to complete the Devon, Cornish, LaPerm, Asian and Selkirk to become an all breed judge when we are all able to return to shows. I have been an all breed Show Manager since 1991. I love all the different breeds of cats and can't wait to get back to seeing the cats and exhibitors in (hopefully) the not too distant future. 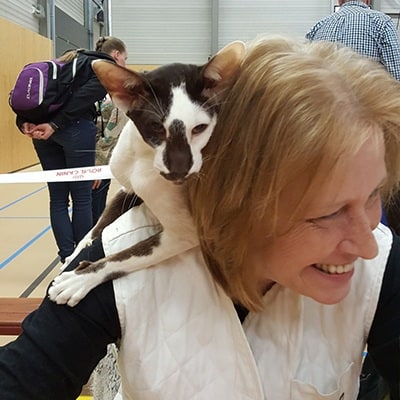 My name is Susanne van Leeuwen (Ruthsatz). Together with my husband Dennis we are the can openers at cattery Heavenly. Cattery Heavenly breeds Siamese and Oriental Shorthair of the modern type. We do it in this order: health, temperament, looks! We believe more in quality then quantity and therefore do not have kittens available all the time. People with cat related questions can always count on us for honest and candid advice. Next to my activities as a breeder, I am also a judge since 1999. So far I am allowed to judge these breeds:Siamese - Oriental shorthair - Balinese - Oriental longhair - Maine coon - Norwegian forest cat - Siberian cats - Neva Masquerade - Thai - Peterbald - Sphynx and Rex. Like all of us, I to miss cat shows, so I am really looking forward to judging in this online show. Thank you Ross for this opportunity and thank you exhibitors for entering your precious cats! 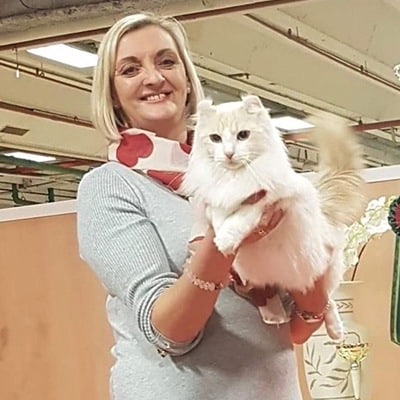 I have been showing pedigree cats since 2002 when I had my first Maine Coon and have exhibited at GCCF, TICA, FIFe, CFA and LOOF all over Europe where I have had multiple titled cats across all organisations. I have the pleasure to share my house with one Maine Coon, a Nebelung and two American Curls that I currently show in TICA and LOOF. I judge in the household pet section at GCCF and am involved in a number of GCCF Clubs as Chairman and am also involved with running a TICA show. I am very much looking forward to seeing all your beautiful cats and the headache of trying to place them! 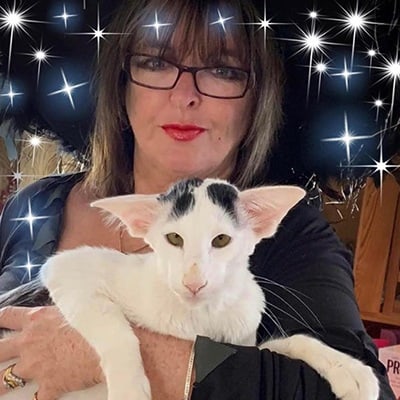 Hi All, I’m Lisa, born on Halloween! , enjoy line dancing, crocheting and the odd glass or two of Prosecco! Am also a proud member of ‘Team Robinson’.! I’m a GCCF Show Manager and together we run a few shows in the South West, or at least we did until Covid hit! Used to been seen exhibiting at cat shows with my beautiful Balinese & Oriental Longhairs, hope to do so again in the future, but only when I feel it’s safe to do so. In the meantime I’m chuffed to bits (!?) to be asked by Ross and Paula to be a judge at their virtual show I’m really looking forward to it, although after speaking to other ‘virtual judges’ out there, trying to narrow down my final line up could be incredibly difficult! Good luck to everyone, I cant wait to see all your beautiful cats xx

Sections will be based around the current 6 pedigree GCCF sections plus a 7th for pets and our show manager will put your cat in the right section automatically.

* Dependent on class loadings judge changes may be necessary but every attempt will be made to stick to the above planned classes.

All cats will receive a certificate recording their achievment with overall best is section winners and the overall best in show winner also receiving beautiful rosettes.

The cost to enter is just £10 per cat. You have the option of entering up to three fun classes which cost just £5 each.

We have tried to keep the entry form as simple as possible. From the information you submit the show manager will determine which section you will be judged in. After submitting your entry you be sent to a new page where you will be asked to confirm the classes you have entered and asked to pay your entry fee.

If you run into any issues or need to contact the show manager you can do so here.

Your photos and entry details will be uploaded to the CattyLicious server and this may take a couple of moments. You will then be sent to a new page where you will be asked to pay your entry fee.